Buck Jordan here. As the founder and CEO of Wavemaker Labs, I spend a lot of time explaining why robots joining the workforce is nothing to be afraid of – and why it’s actually a good thing we should all support.

A perfect example of this is the agriculture industry. It’s no secret that farms in the U.S. have been struggling to make ends meet for the past few decades. Increasingly unpredictable weather patterns, changing regulations, new pests and diseases, and more have made it incredibly tough for American farmers to stay afloat.

But right now, the biggest problem for our agriculture industry is a massive workforce shortage. For example, in California – the #1 state by agricultural output – over 40% of farmers can’t find enough workers to fill their open roles.

I don’t need to explain why that’s such a huge problem; we all need food to eat. And as angel investors, our role is to focus on finding solutions.

At Wavemaker Labs, we’re building companies that will directly help to alleviate the labor shortage in ag. The first company we built is called Future Acres and created a robotic harvest companion, named Carry, that autonomously transports crops from the field to processing facilities for cleaning and packaging. The farms of today have workers dedicated to this task; the farms of tomorrow will use Carry.

Agriculture is under pressure in the US and farmers are choosing to innovate to solve their most pressing needs. The good news is as an angel investor you can help power the next revolution in agricultural technology! Companies like Future Acres, FarmFundr and others are all crowdfunding to raise the capital they need to achieve their mission.

But before we identify the next cohort of startups that could save our farms, let’s dig deeper into the industry overall.

An Overview of American Agriculture

The American agriculture industry is a crucial component of the U.S. economy. Today, US farm output is worth $136 billion, about 0.6% of U.S. GDP. At first glance this seems like a pretty insignificant share. However, agricultural products are key inputs for a range of industries. When you take that into account, the total value added by industries that directly rely on farm inputs – like restaurants, grocery stores and apparel producers – is over $1 trillion, or about 5% of U.S. GDP. 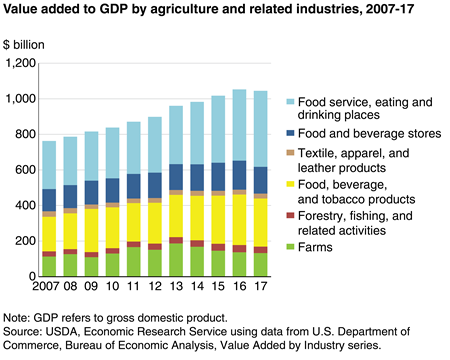 What’s most striking about the American agricultural industry is the dramatic rise in productivity over the last few decades – coupled with significant reductions in the number of Americans working on farms. The output of U.S. farms has grown at a compound annual growth rate (CAGR) of 1.48% in the period between 1948 and 2015.

Compounded across this time period, in practice this means that U.S. farms produce 2.75 times as much output in 2015 as in 1948. In the same time period, the total amount of inputs (machinery, fertilizer etc.) has only grown at a CAGR of 0.1%. Most remarkably, however, the labor used in agricultural production between 1948 and 2015 has decreased at a rate of -2.06% annually.

U.S. agriculture has been becoming steadily more productive and significantly less labor intensive for decades. To put it in perspective, farmers use ¼ the labor they used in 1948 to create 2.7 times the agricultural output in 2015. Despite supporting 5% of U.S. GDP, less than 1% of America’s population now works in agriculture. 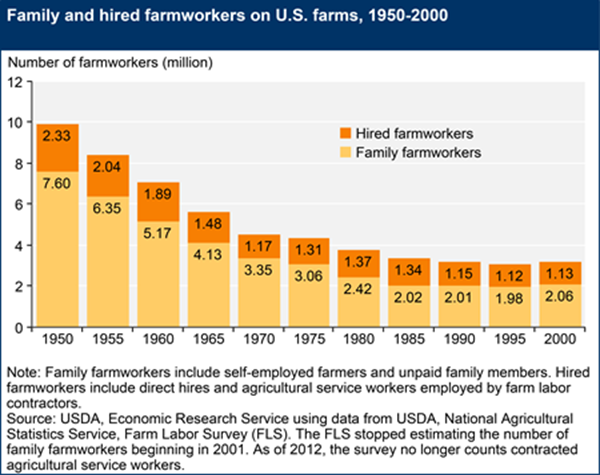 A Reckoning for American Agriculture

Despite all the growth in American agriculture over the past few decades, the industry now faces an existential reckoning. American farmers can’t find enough workers to fill jobs on their farms and operate their businesses.

Zippy Duvall – President of the American Farm Bureau – recently commented on the threat these labor shortages pose and pointed out that “we’re coming to a point where America will have to decide if we’re going to import workers or import our food.”

Farmers outside the U.S. have huge cost advantages compared to American farmers. The American Farm Bureau recently put out a statement on their website that helped illustrate this:

When you look at the difference between farmworker wages in foreign countries and the U.S., it is no surprise that our international competitors can undercut prices in the American marketplace. For example, farmworkers in Mexico are paid an estimated $1.54 per hour, while the 2019 average for the Adverse Effect Wage Rate, the required wage for our nation’s agricultural guest worker visa program, is $12.96 an hour and is expected to increase again in 2020. Summed up, that means it takes farmworkers in Mexico an entire day to earn what farmworkers in America make in one hour. Because of this, foreign-grown products can be sold in the U.S. much cheaper than the American-grown version, which holds down prices – and profits – for American farmers. This reality puts the future of American labor-intensive agriculture in jeopardy.

Fortunately, the choice facing the American agriculture industry is not as binary as importing more workers or importing more food. There is a third option.

Agriculture has always been a very innovative industry throughout history, driven by the necessity to feed more people better food, more efficiently, every year. Technologies like animal labor, plows, fertilizer, mechanization and genetically modified crops have all been introduced and adopted across the world over thousands of years to make agriculture more efficient and productive.

The application of technology and improved farming techniques explains why American agriculture produces 2.75X as much food today as in 1948 with ¼ the people. These kinds of enormous efficiency gains only come from technology. Technology is once again going to help the American agricultural industry navigate these challenges it faces and power ahead. Today the agricultural industry is on the cusp of its next major wave of innovation combining robotics, sensors and aerial imagery to dramatically increase efficiency, reduce costs and increase yield.

Robotics will be one of the first major new technologies to be adopted by the robotic industry in mass. Large parts of the farming process can be automated such as plowing, planting, harvesting and processing. Over the past few years dozens of new robotics startups have launched aiming to automate different components of agriculture.

To truly realize the power of robotics these autonomous systems need to be complemented with rich and powerful data sets. A number of companies are working on generating detailed data to drive precision agriculture forward using satellites, sensors and lasers. Some of these companies include:

While many of these technologies are still in their earliest stages of deployment, they are showing significant promise. By equipping farmers with these technologies we will be able to help partially solve the worsening labor shortage for American farms and reduce costs and increase yields so that they can become more competitive in comparison to international farmers.

Over the past decade I have become increasingly excited about the potential of the agriculture industry in America and the opportunities for us to apply technology to make it more efficient, productive and safer. Future Acres is our first major product launch in the agriculture space, but not our last.

The precision agriculture revolution is just beginning, and hundred more startups will be launched in the years to come – all of which will require investment to realize their full potential, opening up opportunities for angel investors around the world to play a part in helping disrupt agriculture in the 21st century.

Keep an eye out for startups in this space – I fully expect to see agtech explode in the coming years.

I’ll be back soon. Have a great weekend.