Communicating with Silicon Valley, the epicenter of American startups, can be a bit like visiting a foreign country.

No matter where you go, the big picture stuff is the same; you’ll find grocery stores, pharmacies, schools, and museums in every country in the world.

The only thing standing between you and what you need? The language barrier.

Silicon Valley feels like its own little planet sometimes. The “fresh new thing” almost always happens here first, and everything that came before becomes passé.

We’re so obsessed with change (we call it disruption… for now, at least) that even our terminology changes, seemingly on a day-to-day basis.

For better or worse, startup-speak is never going to stop evolving. New words are being added to our lexicon every single day.

And when you meet your first founder, you’re going to need to know the language – or else risk looking like a clueless newbie.

Plus, getting cozy with the slang will make it that much easier for you to get the most out of the Angels & Entrepreneurs Network.

Things move fast around here. Most folks who move to Silicon Valley agree that one of their biggest roadblocks in the beginning was learning the lingo. I’m here to make sure you’re ready to stop scratching your head and dive right into the action.

That’s why I’ve put together an “Angel Investing Dictionary,” where you will find definitions in plain English for all the SoCal jargon you’ll need to know, and then some.

Continue reading below. You’ll be ready to go pro rata on a bootstrapped SaaS-decacorn’s Series B raise in no time.

Acquihire: When a company is acquired specifically to hire its talent (i.e., not for the company or product itself, but to take on its staff)

Accredited investor: Entities allowed to deal in securities that may not be registered with financial authorities (a.k.a. risky investments) because they satisfy one or more requirements regarding income, net worth, asset size, governance status or professional experience

Angel group: A network of angel investors that pools resources to participate in startups’ equity funding rounds; often orchestrated by a Lead Angel who acts as the intermediary between startups and investors

Angel investor: An individual who provides capital for a business startup, usually in the pre-seed or seed stages of funding; either as accredited investors or as members of angel groups or equity crowdfunding services

Asset-based valuation: Derives a valuation by adding the total asset value of items including land, property, and equipment, and then subtracting the liabilities of the company; not a good method for small startups with few hard assets; does not consider future earnings potential

BPS: Basis points, or hundredths of a percent, of a company’s total stock

Bootstrapping: Using whatever resources are available to pull yourself upward. For example: finding a client who is willing to pay for something that you built with sweat equity

Bridge loan: Also known as a swing loan; usually an ask for more money in order to complete a round of funding and “bridge the gap” to hit the next milestone

Broke angels: Advisors who lend their expertise and mentorship in exchange for shares

B2B or B2C: Business to business, or business to consumer; refers to the target market of a company’s product or service

Cap table: “Capitalization table,” or the official list of all the shareholders in the company, how much they paid for their shares, and what class of shares they own

Concierge MVP: A curated experience of the minimum viable product used with a small number of early customers; ensures that the first users have an experience that is as good as you can make it, completely aligned with your vision

Convertible debt: A type of bond that the holder can convert into a specified number of shares of common stock in the issuing company, or cash in equal value

Cost to duplicate approach: An approach to pre-revenue valuation that looks at the expenses the company has incurred to create its product or service; however, does not consider the company’s future potential or intangible assets

CAC: Customer Acquisition Cost, or the amount you spend on average to acquire a new customer

CLV: Customer Lifetime Value, or the total net profit that you earn on average over the course of your relationship with a customer

Decacorn: A business that makes it to $10 billion in revenue

Decade-acorn: A business that makes it to $100 billion in revenue – happens about once per decade

Development stage approach: An approach to pre-revenue valuation that assigns a higher value to companies that are further along in the development process and thus have a clearer path to profitability

Discounted cash flow approach: An approach to pre-revenue valuation that looks at the company’s expected future cash flow; however, is highly subjective and cannot definitively predict a startup’s success; usually used to evaluate established businesses with years of data

Down round: When founders accept an equity investment at a valuation lower than the previously established valuation. The company is worth less now than it was in the previous raise

Dragon: An investment that returns all the capital you have invested

Due diligence: A comprehensive appraisal of a business undertaken by a prospective buyer, especially to establish its assets and liabilities and evaluate its commercial potential

Earnings multiplier models: Approaches to valuation that compare well-established earning metrics of similar companies in a particular industry and assume they apply to your company; however, require startups to know metrics like earnings per share, but they usually don’t yet

Equity: The ownership of the startup – who owns how much; in the most common sequence, the founders own 100% equity at first, then give up chunks of ownership to investors in exchange for cash, mentorship, connections, or work

Equity funding: When founders of a startup trade a portion of their ownership for cash investment

Exit: The moment when founders and funders get their money; favorable exits include IPOs and acquisitions

Founder dilution: The amount of ownership given up by startup founders, expressed as a percentage – “the founders are willing to accept a 20% dilution in exchange for a $200,000 investment”

GAAP: Generally accepted accounting principles, or a common set of accepted standards and procedures that companies and their accountants must follow when compiling financial statements

IFRS: International financial reporting standards, stating how particular types of transactions and other events should be reported in financial statements; non-GAAP (not standard in the U.S.)

Investor dilution: Reduction in the percentage of equity an investor holds as more, larger investors come to the table

IPO: “Initial Public Offering,” or the process of offering shares in a private corporation to the public for the first time; the point at which shareholders can exit some or all of their ownership by selling shares; allows companies to compensate employees through stock compensation

Leveraged buyout: When a company is purchased with a strategic combination of equity and borrowed money; company’s assets or revenue used as “leverage” to pay back borrowed capital

Liquidation: The process of dissolving a company by selling off all its assets

Liquidation preference: An agreement that an investor will receive their investment back in full if the company is liquidated. Often used to get a nervous investor on board, but doesn’t say much for their faith in you, and is a dangerous move for founders

Market approach: An approach to pre-revenue valuation that looks at what similar companies have recently been acquired for; however, the nature of startups often means that there are no comparable companies

Monopoly: When a company is so good at what it does that no other firm can offer a close substitute; with market power, this company can produce at the price/quantity combination that maximizes profit

Moonshot: A project that addresses a huge problem, proposes a radical solution, and/or uses breakthrough technology; a lofty target

MVP: Minimum viable product, or a product with just enough features to satisfy early customers and to provide feedback for future product development

NPS: Net Performance Score, or a metric of the willingness of customers to recommend a product or service to others

Option: The right to buy shares at a lower “strike price,” offered to employees to align their motivations – they do better work once they have a financial stake in the company’s success

Ownership equity: Also known as “shareholder equity.” The value of a company minus liabilities; e.g., part ownership of the company’s assets and liabilities alike

Perfect competition: Markets that achieve equilibrium when producer supply meets consumer demand; every firm sells the same products, so they must all sell at whatever price the market determines. No company makes an economic profit in the long run.

Preferred stock: A class of stock that carries a fixed dividend to be paid out before dividends to common stocks are paid out

Pre-seed funding: The earliest stage of funding a new company as it is first getting operations started; funders usually include the founders themselves, close friends, supporters and family members

Pro forma: A non-GAAP method by which firms calculate financial results using certain projections or presumptions; e.g., the projected status of a company based on current financial statements

Pro rata: A tactic in which an investor continues to contribute in subsequent funding rounds in order to avoid share dilution as more funders join the game

“Putting bad money before good”: Funding a struggling startup or founder past the point when you should have given up, usually due to loyalty or ego

Raise: A round of investing; e.g., Series B is a raise

ROS: Return on sales; before tax earnings as a percentage of revenue

Runway: How far ahead a business can proceed with the amount of money allocated by the funding round

Secondary public offering: When a company offers up new stock for sale to the public after an IPO; often occurs when founders want to step down or reduce their role in the company

Series A funding: Occurs once a company has developed a track record with an established user base and consistent revenue figures; funders usually include angel investors and VCs; average range $2 million to $15 million; less than half of seed funded companies make it to this stage

Series B funding: A round of funding focused on taking the business to the next level; companies at this stage normally have a valuation of $30 million to $60 million; followed by additional rounds as needed (C, D, E, etc.)

Side letter: An agreement between a company and the investor in addition to the standard deal terms

SaaS: Software as a service; product is hosted remotely (cloud)

Startup: A young company that is just beginning to develop, usually small and initially financed or operated by a handful of founders or one individual

Sweat equity: The creation of company ownership in the form of working on it for free

Syndicate: An angel investing group that allows many more people to invest smaller amounts, some as small as $1,000, headed up by a syndicate lead who will reap 20% of the total ROI

Term sheet: A non-binding agreement that outlines the major aspects of an investment to be made in a company; sets the groundwork for building out detailed legal documents

T.A.M.: Total Addressable Market, a reference to the revenue opportunity available for a product or service; e.g., the underlying revenue potential

Unicorn: A business that makes it to $1 billion in revenue

Venture Capital Firm: A group of investors who gain income from wealthy people who want to grow their wealth by using their money to invest in riskier businesses than a traditional bank is willing to take on, often in the later rounds of startup funding and for millions of dollars

Vesting: When an employee of a company is granted rights to stock options provided by the employer; these rights gain value (vest) over time until they reach their full value, giving employees an incentive to perform well and stay with the company longer 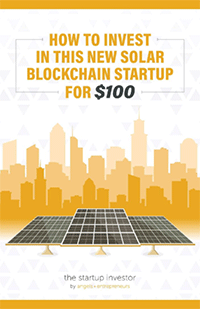 How to Invest in This New Solar Blockchain Startup for $100 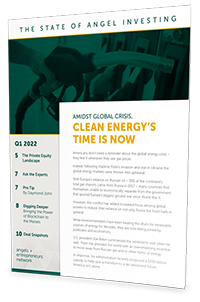