Today, people spend an average of roughly two-and-a-half hours of their days on social media.

However, despite the omnipresence of these applications in our daily lives, the landscape of social media is in flux now more than ever.

TikTok, the current bell of the ball, fell back under public scrutiny following FCC commissioner Brendan Carr telling Axios he doesn’t see any “path forward except for a ban” for the Chinese-owned startup. Meanwhile, the company has continued to pivot its strategy to more closely resemble a combination of social media and search engine.

Twitter has been the subject of endless headlines of late following Elon Musk’s successful acquisition. However, the uber-entrepreneur’s more than ruffled the feathers of the app’s users, and many remain pessimistic about the platform’s attempts to achieve profitability.

Facebook has lost roughly $700 billion of its market cap amidst the company’s public struggles to transition into the metaverse and a precipitous drop in ad revenue following Apples’ changes to its operating system.

Instagram users remain disenchanted with the company’s seeming insistence on eschewing its photo-based business, instead opting to mimic the functionality of TikTok.

In Snapchat’s latest earnings report, the company forwent a forward-guidance projection due to the uncertain economic landscape. This sent the stock plummeting roughly 30% despite the company beating its earnings per share projections by 1,051%.

That said, the doom-and-gloom outlook of the social media landscape is slowly opening the window of opportunity. Consider the following tweet from Laurie Voss, a web developer… 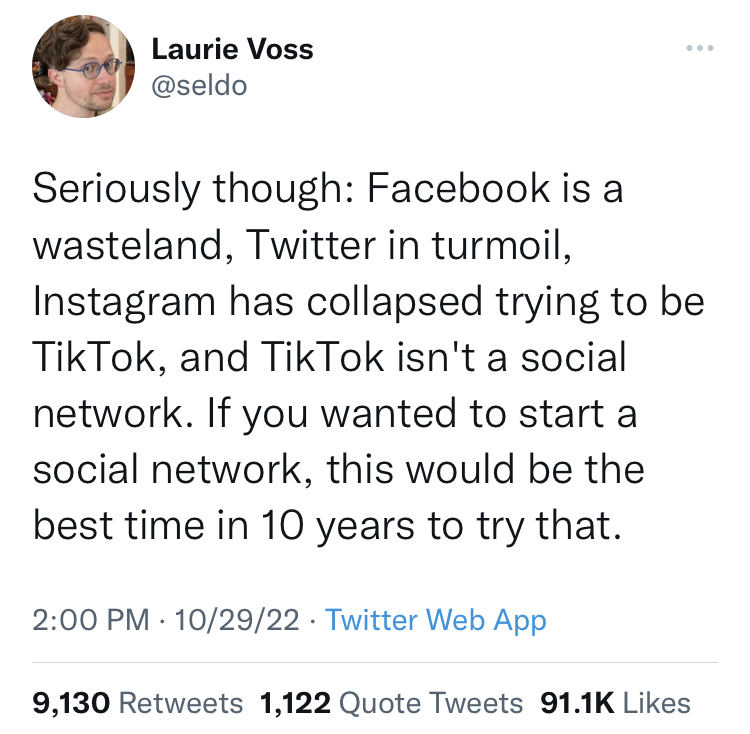 Of course, it will be no small task to unseat the companies currently sitting atop the social media hierarchy.

However, TikTok’s rapid ascension up the ranks serves as a reminder of the possibility for a newcomer to show up and disrupt the fold.

There are also many who believe the turmoil surrounding Twitter and Facebook, which have been experiencing slowed growth for the past few years, is only just beginning.

Should Musk and Zuckerberg fail in their attempts to revolutionize their platforms, that window of opportunity will only open wider. Of course, startups are the ones poised to jump through it.

While it is difficult to pinpoint the type of social media platform that will ascend in the coming years, it is a reasonable bet that some will emerge and join the popular ranks.

At the end of the day, this turmoil could just be the perfect breeding ground for prosperity.

That’s why we’re keeping our eyes peeled for interesting investment opportunities in the space. If successful, these companies possess valuation ceilings practically unparalleled in the business world.

We suggest you do the same.