Buck Jordan here to talk to you about all things markets, especially how to size them.

Picking your market is absolutely critical when deciding to build a company and equally so when deciding to invest in one. Andy Rachleff a partner at Benchmark Capital – one of Silicon Valley’s most iconic venture capital firms – once said:

This statement perfectly captures decades of investing wisdom condensed into a few short sentences. When building a startup it is almost impossible to change the dynamics of your market. The size of a market and how competitive it is are like forces of gravity. No matter how much money you throw at the problem, eventually these market realities assert themselves and help determine how large and successful your business can truly be.

So when it comes to investing in startups you want to pick markets just as much as picking specific products and teams you think have potential. So how do you pick a market? Well one of the most important factors in picking a market is the size of that market. Here’s a couple ways to think about sizing markets that investors around the world (us included!) use to size markets.

Top-down market sizing involves looking at a potential market as a whole and then narrowing down to the specific segment of the market a startup’s product is relevant to. You start at the very broadest level – the total market size – and slowly and steadily narrow down to the specific segment that a startup’s product is designed to target – the addressable market.

So what does this look like in practice? Let’s take Upright, a seller of instant oatmeal products that is currently crowdfunding as an example. 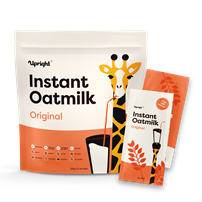 While oat milk has been growing in popularity in the United States it accounts for a share of the total non-dairy milk sales annually. Once again we can go a layer deeper and look at the total annual sales of oat milk in the United States. Using data once again from CNBC/Nielsen we can see that back in 2019 oat milk sales were roughly $50 million annually. However, this data is a few years out of date and oat milk has been growing rapidly and since this data was published oat milk sales have rocketed to $350 million annually. 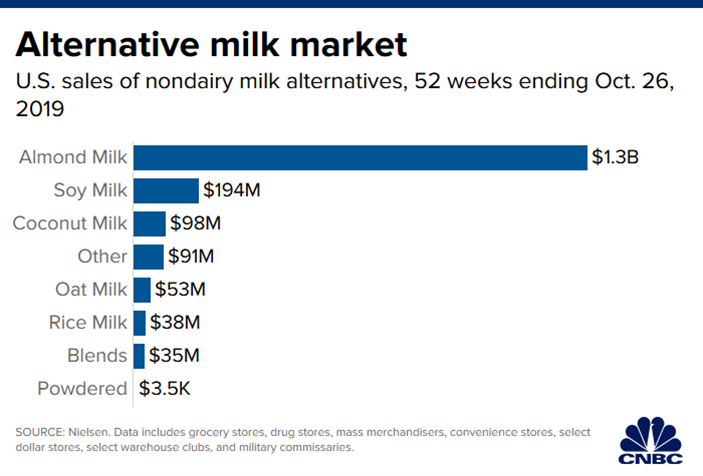 As investors we invest in companies with the belief that over time they will capture market share. This is why the size of a market is so important. Having 1% market share of a $50 million market is significantly different from having 1% of a 50 billion dollar market. When it comes to analyzing Upright’s market size the most optimistic way to look at it is to use figures for the total dairy and non-dairy sales combined annually, roughly $14 billion. However, a more realistic way to analyze their opportunity is to look at the annual sales of oat milk and underwrite what kind of market share we think they can capture 1, 5, 20% etc. This is in a nutshell how top-down market sizing works.

Another common approach to market sizing is the bottoms-up approach. This approach involves looking at the basic unit of a product and the price of each of those units and multiplying it by the number of customers you believe are part of a company’s addressable market. Let’s look at the example of Miso Robotics to see how bottoms-up market sizing works. Let’s say we’re trying to size the market for our Flippy 2 product which we sell to restaurants starting at $3,000 a month or $36,000 annually.

The next step is to figure out how many potential customers there are out there for Flippy 2. Given that Flippy two prepares fries and wings it’s logical customer base are quick-service restaurants (QSR) like Wingstop, McDonalds, Chipotle and others. As of the end of last year there are about 197,000 QSR restaurants in the USA. Given this, we can multiply the average revenue per customer for Flipply 2 ($36,000) by the number of addressable customers out there (197,000) and come up with a bottoms-up market sizing of $7 billion.

Now $7 billion is a healthy sized market to go after for any startup, especially a startup like Miso that has the clear technological lead and leading brand in the food automation space. When sizing a market as an investor it always pays to be conservative. We haven’t included in the sizing of Miso’s market some other potential customers such as sports stadiums, non-QSR restaurants or restaurants outside the US. So as an investor we know that the $7 billion addressable market in the US is large and worth going after and we also know that there is potentially even more upside with new markets outside of this core addressable market.

It’s Not a Zero Sum World

The last thing I want to leave you with this week is that the world of startups and business is rarely a zero-sum world. Time and time again in my investing career I’ve seen that when startups are launched in markets with plenty of legacy customers it is rare that they steal a large part of the market share of these legacy players. Instead what I’ve seen is that startups that offer better, faster, cheaper versions of existing products expand the market for those products. They grow the pie.

Think about the example of electric cars. For a long time everyone – especially Tesla fanboys – thought Tesla was going to displace so many traditional automakers and capture huge chunks of their market share. Instead, Tesla opensourced all their patents with the aim of accelerating the whole industry’s shift towards electric vehicles.

Now your first reaction to Tesla doing this is probably to conclude that the traditional automakers with their massive design teams and huge, sophisticated manufacturing operations would soon release electric cars of their own that would be better and cheaper than what Tesla produces – stealing market share back from them. Instead, as the graphic above from mining.com shows, all these automakers are selling more electric cars today than in 2015 and will sell many more cars in 2025 than today.

Next time you’re looking at angel investing in an opportunity I hope you use these tools to size the market and keep in mind that markets are rarely every zero-sum. Happy investing!

I must say that Startup Investor articles from Buck and Unicorn Hunting with Chris are probably my two most favorite things currently coming out of A&E. As a startup investor, I definitely agree that you want to see at least TAM of 10B in order to expect unicorns to happen. From the article it almost appears that $350M of oat milk sales is too small to consider Upright, but is it so?

Oatly, a manufacturer of oat milk and oat products, recently raised $200 million in funding from backers including Blackstone Group Inc., celebrities Oprah Winfrey and Jay-Z, and is currently valued at $2B. Rumor has it that Oatly plans soon to IPO in the US at a $10B valuation. I personally believe it is a good sign to see unicorns in the oat milk and oat food category as a good indicator that other startups like Upright could follow the suite too.

Oat milk is currently the second top selling plant-based non-dairy milk product after almond milk. During my research I have realized that oat milk has some significant advantages over cow milk and almond milk – best creamer and steamer choice for coffee shops, best choice for baking, and the only choice for a growing number of people with lactose and nut allergies.

I have a special place in my heart for startups from my home state CT, and as long as they appear viable, I tend to invest in them to support my “neighbors”. However, I still did some good amount of due diligence on the above mentioned startup Upright, and I invested regardless of being from CT or not. I did just the minimum amount only because they are still pre-revenue.

The company is led by two very intelligent and determined Yale MBA graduates. They created a powdered oat milk product to start selling soon. Next in their R&D pipeline are creamers, yogurts, ice creams, and spreads. In the future Upright also plans to get involved with a personalized nutrition, alternative proteins, and byproduct extraction for upcycling so, the plans and goals are far beyond from just being a powdered oat milk one trick pony.

So always pay attention to the size of the TAM. Anything with $10B or more is great, but don’t overlook Upright at a $5M valuation, just because of the current $350M of oat milk sales in the US. I am partially lactose intolerant and besides certain cheeses, most dairy products don’t agree with me. I promise that if Upright investment goes to zero, or otherwise disappoints me, I will punish myself by drinking half a gallon of raw cow milk.

Thank you for sharing Buck I really don’t know how you do it being so busy with Wavemaker. Also, I don’t know about the size of the milk market example given Oatly being such a large player worth 10 billion. Thank you for taking time in teaching the network, learning tons.