Buck Jordan here to talk to you about a trillion-dollar opportunity: going green.

By now, I’m sure you’ve read, heard and seen climate change mentioned across the news, radio, podcasts, family dinners and everything in between. It’s one of the key challenges of our time, and the consequences of unmitigated climate change could be devastating.

Increasing temperatures, more severe natural disasters and water shortages are just a few of the many negative consequences of a warming world. Estimates suggest unmitigated climate change could shave 11-14% off of global economic output by 2050, which will amount to $23 trillion in lost output. To put things in perspective, the gross domestic product of the U.S. crossed $23 trillion for the first time in 2021.

These eye-popping numbers are certainly cause for concern and action. Fortunately, I’m an optimist, and I believe technology will play a critical role in helping us fight climate change and manage any of its potential resulting consequences.

Technology will be a key tool in our arsenal to fight climate change. Here are three areas of climate technology I think are going to be huge in years to come.

The first and most obvious area to go green is through our production, distribution and storage of energy.

Modern civilization requires enormous amounts of energy. From heating and cooling our homes, to powering factories and keeping our cities lit, nearly every single element of human life requires the use of energy.

This simple fact is never going away. While we can build more efficient houses, factories and streets – which is important – the fact of the matter is we will always have huge energy demands. So, to really fight climate change we need to go right to the source: energy production.

For a long time, green energy was simply too expensive to make economic sense, regardless of our climate demands. Technologies like solar and wind were looked at as cool and nifty but not feasible for large-scale deployment. This remained the fact for decades.

Quietly, however, researchers have been working in the background to incrementally and steadily make technologies like solar more cost effective.

In 1976, the cost of a a photovoltaic module – better known as a solar panel – was $106 per watt of energy produced in today’s dollars. This has been dropping for some time. By 2020, we hit a crucial tipping point, lowering that cost to just $0.38 per watt.

Even more critically, at $0.38 per watt – when correctly configured – solar production becomes the cheapest form of energy generation in human history. 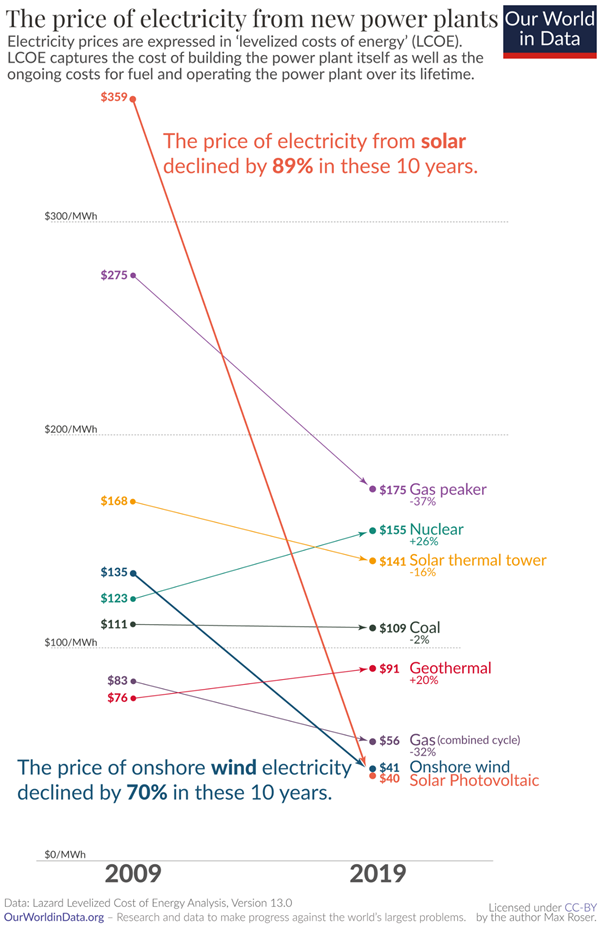 The incredible progress of solar is a testament to the power of technology in helping to deal with climate change. Now that it has become so cost-effective, it makes economic and environmental sense to go green.

But producing green energy is only half the battle; storage is equally, if not more, important.

The sun shines for a few hours a day, and some days are windier than others. However, we need roughly the same amount of energy every day.

To bridge this gap, we need grid-level storage for excess energy to create reserves that help balance these ups and downs.

Grid storage – like green energy – has been limited by the particularly high costs of large-scale batteries. The most advanced battery technology we have today is lithium-ion batteries. We have lithium-ion batteries in all our smartphones, and it is a major reason they are so expensive. However, they charge faster, last longer and are lighter than any other battery technology.

The huge advances in solar and lithium-ion battery technology are starting to make a dent in global energy production. But we still have a long way to go.

Fortunately, several startups are crowdfunding today for products that use solar and batteries.

For example, GoSun offers some really cool solar-powered outdoor gear for those of us who love the outdoors. On the other hand, Pi Energy is building what seems to be some cutting-edge solar technology designed to turn any surface into a solar panel. Lastly, PVPallet has realized that solar deployment will rise enormously throughout the next few years, and they are dedicated to make the shipping of solar panels safer and more eco-friendly.

Decarbonizing our Day to Day

Another major area of innovation I’m excited about are technologies that help decarbonize different aspects of our day-to-day life.

Carbon emissions come from a whole range of activities – construction, agriculture, transportation, manufacturing and many more. Most of the systems, equipment and processes we’ve developed throughout the past few centuries to make our economies more productive, our products higher quality and our lives better were not designed to be carbon efficient.

There is a huge opportunity to retrofit, upgrade and alter existing technologies to reduce their emissions and impact on the economy. By retrofitting and upgrading existing technology, we can quickly make an impact instead of having to wait years to develop newer, next-generation technologies.

A good example of what this looks like in practice is FuelGems, a startup that manufactures and sells a multi-action fuel additive designed to make traditional petrol cars emit far fewer emissions.

Initial results from the startup’s research and field tests have shown it can reduce greenhouse gas emissions by 10-50%. Excitingly, FuelGems is currently crowdfunding.

While electric cars are the future of road transport, the reality is that it will take some time until all cars on the road are electric. But, technologies like FuelGems allow us to pursue stopgap measures to decarbonize our existing technologies and have immediate impact while giving time for newer technologies to be developed and implemented.

Another startup that is crowdfunding and working on a similar technology is Aquipor, which has designed a greener, higher-performance concrete.

The concrete industry is responsible for 8% of global emissions every year. Aquipor’s concrete is made from reclaimed materials, helping significantly reduce its environmental impact while still offering enhanced performance relative to traditional concrete.

Ultimately, it’s going to take thousands of entrepreneurs and billions of dollars to give us the range of powerful technology tools needed to counter climate change.

As the major challenge of our time, I’m confident we will mobilize to deal with it. I think energy generation, energy storage and products that decarbonize our day-to-day lives are huge areas of opportunity to make great investments.

But that’s just the tip of the iceberg; there are many more compelling areas for innovation in green technology. I’m excited to see them develop and to invest in the best companies in this space.

Consumers are gradually moving toward a holistic lifestyle, changing business practices and increasing the consumption of green products. Green products will protect or improve the financial and environmental challenges like pollution or toxic waste by saving energy and reducing harmful substances. The technology has more advanced developments coming.

I love the idea of storage for energy and other resources

Yes I believe in the future of green energy, and as far as I know, there are a lot of companies that work on new batteries design to increase their capacity

Okay, so how would someone invest into this company?