Buck Jordan here, and today, I want to talk to you about something that has shifted away from the public consciousness – but remains prominent in the minds of investors.

Back in 2016, California was one of the first U.S. states to legalize the recreational use of cannabis through the passing of Proposition 64. Since then, the cannabis industry has exploded in California, and today the state has the largest legal cannabis market in the world, with $5.2 billion in sales in 2021 alone.

Nationwide, the cannabis market saw $25 billion in sales in 2021, helping support 500,000 jobs. This market is set to grow at a breakneck pace, with some estimates forecasting it to be worth $70 billion in the United States by 2030.

Simply put, the rapid rise of this new multi-billion-dollar industry – and its steady growth in the years to come – creates rich veins of opportunity at every level throughout the industry.

Since 2018 when California began taxing cannabis, the state has brought in more than $3.7 billion in taxes. California’s example has inspired many other states to follow suit and legalize recreational cannabis over the last few years. This beautiful graphic from Rolling Stone gives you an idea of where we stand today. 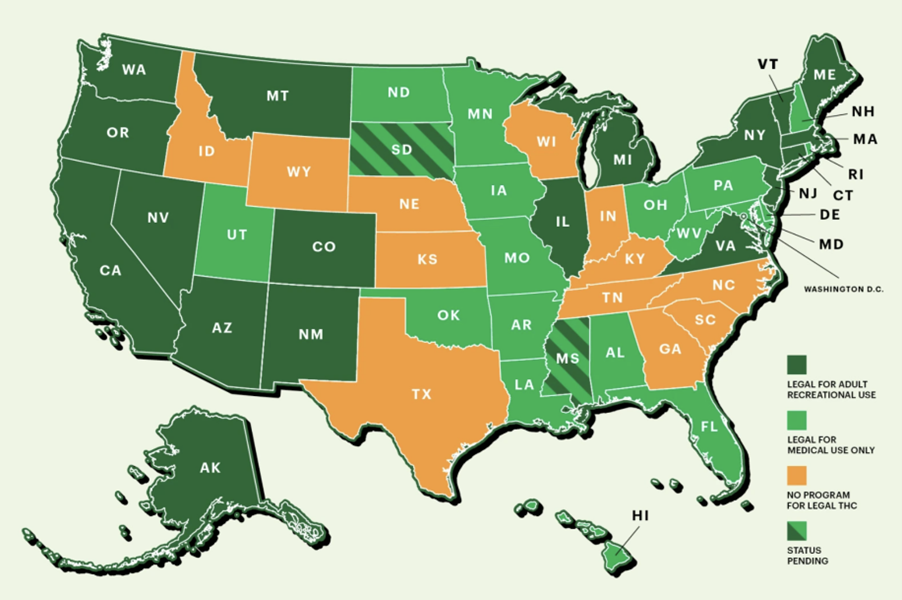 Let’s face it, legalization of recreational cannabis at the federal level is coming, and many states are taking the initiative to get ahead of the curve.

As a sign of the shifting national sentiment, in the 2018 Farm Bill, the federal government legalized hemp – which is a cannabis plant – for industrial use nationwide.

Of course, this topic has been prominent for what feels like decades in this country. While there was a lot of momentum behind cannabis investment a few years ago, some of that has slowed of late.

But there’s a difference between delayed and canceled.

It’s true that in the interim, the lack of federal legalization has made it extremely challenging for cannabis businesses to operate, whether they are farms, brands, or dispensaries. In fact, because cannabis remains a Schedule I drug at the federal level, many companies that operate nationwide refuse to work with cannabis businesses at the state level for fear of being subjected to federal regulation and enforcement.

For example, a notorious complaint from cannabis business owners is that they can’t open business bank accounts, get loans, and process credit and debit card payments. Business owners also complain about unfair or complex tax systems, lack of industry standards, and a host of other issues.

Of course, in the world of startups, where there are pain points, there are people trying to solve them – and the cannabis industry is no different.

In fact, since California has been at the vanguard of the legalization of recreational cannabis, it’s not surprising that it is also home to dozens of cannabis startups. Here’s a list of 70 cannabis startups based in Los Angeles alone!

These startups are solving a wide range of problems, like packaging, delivery and warehousing, cash management, smart sensors, and much more.

Because the cannabis industry is so young, there are so many problems to solve and so many lucrative opportunities to go after. I’ve met dozens of cannabis startups through the years, and out of all the ones I’ve met, I’ve invested in three so far.

A bit of research will show that each of these three companies hit my most important criteria as an investor:

As a whole, the cannabis industry is still early days. However, that means the opportunity to make smart and highly lucrative investments in the space is similarly fresh.

I’m confident there are many more great companies to be built in the years to come. So, keep your eyes peeled!