Buck Jordan here. We’re facing a wildfire emergency across this country. We need to mobilize to confront the challenge.

Every year, millions of acres across the United States are burned to a crisp, billions of dollars of damage done, and thousands of properties destroyed. As a resident of California, I’ve seen first-hand how wildfires are growing more common and more dangerous.

During the state’s annual fire season – between July and October – we hear fire warnings on the radio. In the worst years, smoke envelops Los Angeles (where I live) and can hover in the air for weeks. People don masks to help filter out smoke. But even then, your throat gets scratchy and sore.

As climate change continues to take its toll, we’re seeing the scale and intensity of wildfires around the U.S. increase significantly. In fact, five of the worst affected years for wildfires in the United States all happened in the last 20 years… and three of them in the last seven years. 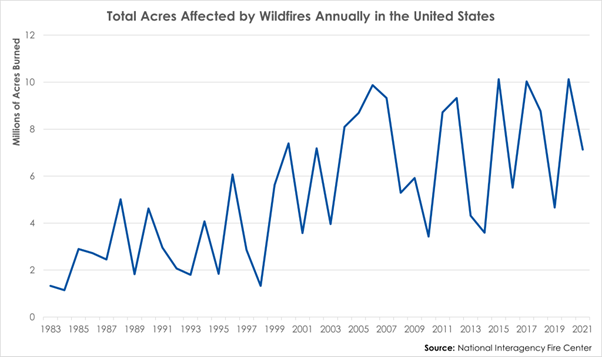 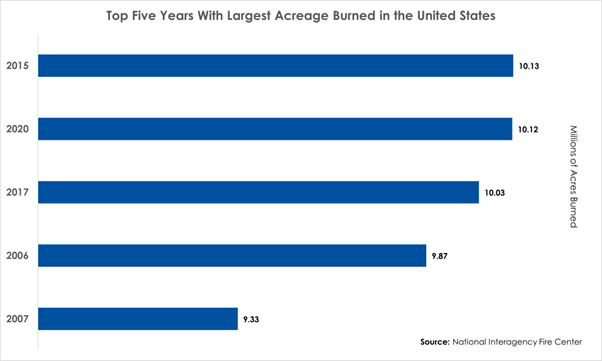 Besides the obvious damage to land and wildlife, wildfires also inflict enormous costs on our economy every year.

While it’s difficult to estimate the exact numbers, the weather company Accuweather reckons that California’s wildfires in 2018 caused a shocking $400 billion worth of damage in just that state alone.

A huge chunk of these costs come from property destruction. Nationally over 40,000 structures have been burned from wildfires between 2018 and 2021. Unfortunately, there are millions of properties across the country in high-risk fire zones. Here are estimates for the top five states by the number of at-risk properties:

As wildfires have worsened across the country, Federal spending to combat wildfires has steadily increased. Federal wildfire suppression costs have soared from an annual average of $425 million between 1985 and 1999 to over $1.6 billion between 2000 and 2019.

However, despite increased funding, we’re struggling to cope with wildfires. And the biggest wildfires – which cause the most damage – typically burn out-of-control.

With a bleak outlook, the government, agencies and startups are turning to unconventional ideas to find solutions.

One area proving helpful is technology.

Firefighters are increasingly testing and adopting new technologies in the quest to improve fire suppression. For example, satellite imagery and cameras are being used for early detection of fires and even prediction… where will a fire burn next?

But one of the most promising new technologies being applied to fire suppression are drones.

As an entrepreneur that has built several companies in the robotics and autonomous vehicles space, the mental image of a fleet of drones fighting wildfires across the country gets me super excited.

The most intense wildfires create several significant challenges for firefighters.

Firstly, these blazes typically grow and expand extremely rapidly, especially during high winds. As the surface area of a fire grows exponentially it can quickly outstrip the local firefighting resources available to combat the blaze.

Secondly, firefighting planes are a key part of fire suppression and are used to survey wildfires and to drop fire retardant on dangerous blazes from above. However, these pilots can’t fly in the dark or in overly smoky conditions.

Lastly, fighting wildfires is particularly dangerous and every year firefighters lose their lives in the field.

Drone technology is able to circumvent these challenges.

Drones are relatively cheap and highly mobile so they can supplement existing firefighting capabilities. They enable firefighters to combat far larger wildfires successfully.

Drones can fly and fight fires at night safely and can be equipped with cameras that can see through smoke.

And, while losing a drone to a wildfire is not ideal, it sure is better than losing a person.

All these reasons and more are why I’m super excited about what the team at a startup I’ve featured in my New Wave Syndicate service is building.

It’s designing and developing drones that can help combat wildfires as well as be used for other challenging activities like industrial logistics and providing healthcare to remote areas.

Right now, they’re raising funds. As an angel investor, you’d be wise to check out the details and invest.