There is no one secret sauce when it comes to building a successful startup.

That’s because the success stories are not one size fits all. The days of Silicon Valley representing the vast majority of early-stage companies are long gone, as different states – and countries – assert themselves as viable outlets for investment.

The same can be said about those individual founders’ origins.

It used to be that an Ivy League degree (or semester…) would be enough to give a leg up in the pursuit of capital. However, nowadays, the distribution of universities that entrepreneurs hail from has grown a lot broader.

Illustrating this fact, Pitchbook released its 2022 list of the top 100 colleges ranked by startup founders produced, and the results provide a useful glimpse for angel investors.

While the usual suspects are certainly well represented, the picture painted shows an increasingly globalized startup landscape and opportunity for founders from all walks of life.

Here’s a glimpse of the top 10 undergraduate colleges in terms of founders, companies, and capital raised: 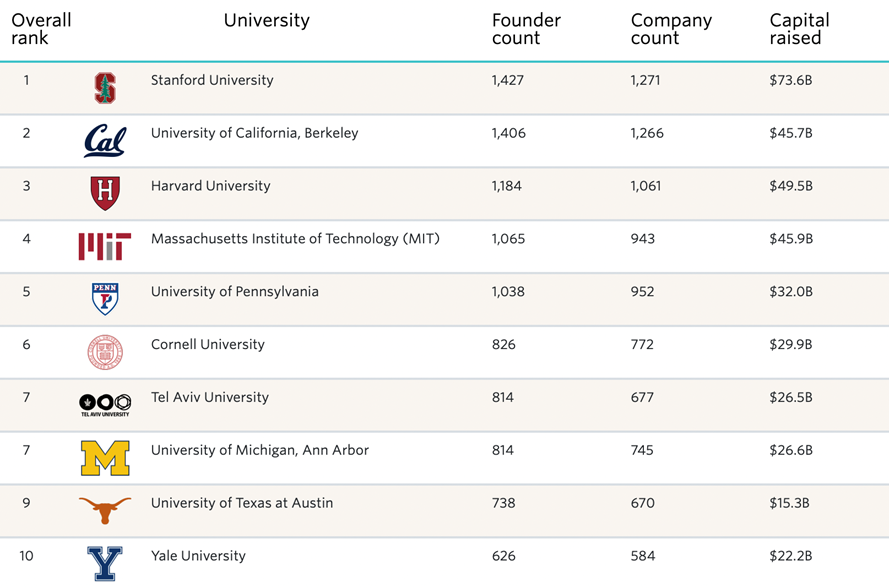 It should come as no surprise to see names like Harvard, Stanford, MIT, Cal Berkeley, and UPenn comprising the top five. After all, these are institutions that have routinely churned out founders through the years.

However, a closer examination of the top 100 list shows the widening scope for founders.

More than 25% of the top 100 undergraduate producers of founders are international institutions. Meanwhile, 30 of the 50 states have at least one college on the list.

(Also, be on the lookout for Zuckerberg University cracking 2023’s list following the more than 11,000 people laid off at Meta…)

Jokes aside, the geographic spread shows the shift in investment that’s taking place throughout the landscape, one that many feel was long overdue.

“[Historically], there’s five universities that basically get all the funding,” KingsCrowd founder and CEO Chris Lustrino said at the 2021 Angels & Entrepreneurs Retreat. “I guarantee you they do not have a hold on all the good ideas.”

As the list shows, this is undisputable. That said, the list also gives useful information for prospective investors and provides one more piece of data to apply to your due diligence.

And if you’re thinking about investing in a founder who doesn’t hail from one of these institutions – don’t fret.

Founders come in all shapes and sizes from every corner of the globe. The expansion of the ranks is truly only beginning.