When Apple released the iPhone in 2006, it marked a sea change in the mobile phone industry.

When Big League Chew was released, nobody wanted to eat gumballs anymore.

Alright, that last one is a bit of a stretch, but the point remains the same – every so often, innovations are introduced that forever alter the way society operates.

And so, this reality underscores the gravity of the moment underway in the technology industry.

A development Google classified as a “code red” for the future prospects of its search-engine business.

We’re talking about the research lab OpenAI, the startup behind the two AI tools – ChatGPT and DALL-E – that have taken the internet by storm and sent shivers through some of the biggest tech companies in the world.

ChatGPT is a language-processing, machine-learning chat bot that can converse with users, answer complicated questions in simple terms, write essays for high school students, poetry, code in high-level programming languages, and anything in between.

Here is an example of ChatGPT in action… 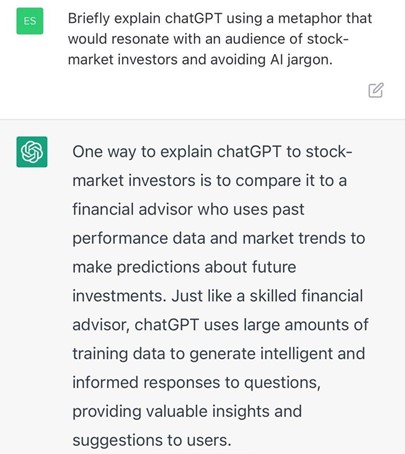 The seemingly endless possibilities of this technology are the driving force behind its recent $29-billion valuation.

And while there are still kinks to be worked out – the AI is not immune to biases and hate speech, as the base of its knowledge is the internet itself, and there are ethical concerns surrounding DALL-E from the art community – there are many who suspect it could represent a similar sea change as Apple and Google before it.

Google, for instance, is particularly concerned about Microsoft using ChatGPT to overhaul its Bing search platform and provide users with a more streamlined, simple answer to their queries.

This would be particularly troublesome because more than 80% of Google’s revenues come from digital advertising. What was once the norm for users could quickly transform into an annoyance with the introduction of a simpler solution.

Meanwhile, much of Microsoft’s interest in OpenAI stems from a desire to bring its cloud-computing business to a similar – or higher – level as Amazon Web Services.

All things considered, there’s no doubt these tools have captured the public consciousness. More than 1 million users used the chatbot in its first week, and DALL-E is generating more than 4 million images per day.

It’s no surprise OpenAI projects $1 billion in revenue by the end of 2024.

That said, the AI race involves many competitors, and while OpenAI is in the lead at the moment, there’s no telling who ultimately emerges as the champion.

Google, Meta, Amazon, Microsoft – you’d be hard pressed to find a tech company that isn’t spending gobs of money looking to get the leg up.

And so, if a startup comes along with the capability to provide a boost, it likely won’t be long until they’re receiving capital or acquired – sending their valuations ballooning like OpenAI’s.

As always, we will be sure to keep our eyes out for exciting crowdfunding ventures with the opportunity to do just that.