Startups actually wield a lot more power than one might think. Startups are the companies that create the most disruptive technologies that move our industries forward… and in doing so, they keep the big guys on their toes.

There’s no example of this more fitting than the coveted FAANG group (Facebook, Amazon, Apple, Netflix, and Google). FAANG accounts for over $4 trillion in market capitalization… meaning they hold 12% of the entire S&P.

These five companies dominate the big tech landscape. But the FAANG group has been accused many times of being too powerful and using that power to smother their competition.

This past week, Congress invited the FAANG CEOs to testify in front of the House Judiciary’s antitrust committee for that exact reason.

Each member of the committee questioned the CEOs for five minutes on a number of topics… but one of the most interesting topics of debate was a 2012 email from Zuckerberg to his COO David Ebserman, which suggested that they should buy out their most immediate competitors: Instagram and Path.
Zuckerberg wrote, “The businesses are nascent but the networks are established, the brands are already meaningful, and if they grow to a large scale they could be very disruptive for us.”

Zuck’s vision was a combination of neutralizing the competition and integrating their products. He hoped the deal would give Facebook time to integrate the best features from each company before losing any more ground. To me, these emails beg an interesting question:

Why do these behemoths even care about competition in the first place? 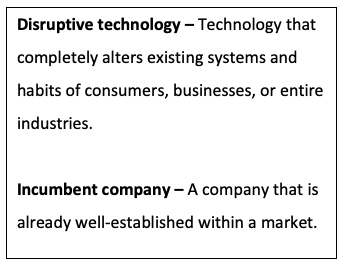 The answer lies in the innovator’s dilemma.
The Innovators Dilemma, first published in 1997, proposes the idea that disruptive technologies are what enable new markets to emerge.
And when new markets emerge, it can be troublesome for well-established incumbent companies.

Incumbent companies, as a result of listening to their customers, analyzing their competition, and regularly maximizing their performance quarter over quarter, tend to be hyper-focused on the here and now, rather than considering potentially disruptive new technologies.

This leaves incumbent companies vulnerable and unprepared when newer, more disruptive companies arrive on the scene. That’s not to say these managers don’t recognize or want to embrace new market trends, but…

Many of them fail to recognize the true disruptive value of these new products.

Take photography company EastmanKodak, for example. EastmanKodak dominated the photography industry for decades before hitting a sharp 21st century downfall and ultimately filing for bankruptcy in 2012. Their downfall was driven by the evolution of digital photography, and they couldn’t keep up.

Their failure wasn’t because of poor management.It was because they failed to recognize the value of digital photography before it was too late.

The EastmanKodak story is one piece of a larger trend of companies struggling to adapt to industry evolution. But strategy is dynamic, and many incumbent companies have found ways to adapt – especially those that are still run by the original founding team.

This is the case for Facebook, Amazon, Netflix, and Google – and for Apple’s Tim Cook, who worked closely with Steve Jobs for many years too.

Contrary to popular opinion, this is very positive for angel investors.

Large public tech companies understand that startups pose significant challenges to their business, and for that reason, they’re willing to pay exorbitant acquisition prices. Instagram, for example, was bought by Facebook for a whopping $1 billion despite the fact that the company only had 11 employees.

We can also point to WhatsApp, which was purchased by Facebook for $16 billion in 2014. Both of these companies made significant fortunes for their angel investors and venture capitalists.

The FAANG group and other large public tech companies are also held in check by the fact that there are multiple trillion-dollar companies willing to bid on the most valuable startups. That being so, it is important – and a positive development – that Congress is looking into the anti-competitive practices of these companies, as there is a thin line between competitively bidding on startups and cloning and/or targeting them.

That’s exactly what Facebook did with Snapchat, in a market where, before the rise of TikTok, it owned three of the top four social networks (Facebook, WhatsApp, and Instagram). This type of activity is anti-competitive and against the interest of consumers and the startup ecosystem.

But this type of activity also lets us in on a big corporate secret…That the largest mega-corporations in the world are not immune to the power of disruptive technology. Startups are the true driving forces of the corporate landscape and the market has now caught up with this fact.

And that’s exactly why investing in startups, not publicly-traded companies, is the best way to make the most money in the shortest amount of time.

Have a great weekend, and I’ll be back soon.

The article makes excellent reading. But I want to suggest to you that we go into partnership arrangement so that I can represent some of your dreams in reaching out to people in our region in the South Pacific so we can invest or earn money together with your Company. Please explain any plans you have at present.

What’s the number one,three stocks that’s trade under a secret name,that you can you on any brokage account ??…

Thank You For Giving Me A Chance To joint Your Team I really Appreciate Your Help….. Have A Nice Day….
God Blessed…

Thank You Very Much For Your Help To Join Your Team Of Success, I really Appreciate You Kindness Have A Wonderful Day Ahead Of every Body……. God Blessed

David, thanks again, I do enjoy your and Neil Patel’s newsletters.

Hello,
I live in Switzerland and am a Swiss citizen. I do not have American citizenship. Are your startups open to investment by non-Americans? Also, do you have startups that can be invested in from a normal brokerage account?
Thanks & Best Regards

Thanks for your questions! It really depends on the individual startup – some are open to non-Americans, while some are not.

The best thing to do in this case would be to check with Switzerland’s securities commission. In the U.S., it’s the Securities and Exchange Commission, and in Switzerland, I believe it’s FINMA. They will be able to assist and tell you whether or not this is possible.

To answer your second question: Startup investing does not go through a brokerage account. Instead, you create individual account on each crowdfunding platform you use, and invest directly through those sites.